Yesterday was a strange day for me, scroll down for polish talk and pics :)

First I brought Evi (my fosterkitten) back to the shelter. She was overwhelmed when she got in her new room which had lots of other cats as well, and even though she was always very interested in other cats, this was a bit much.
After soothing her a bit I left the room, but the people at the desk were busy so I went back in again. When I called for her she came to me again (she was checking it all out from under a cage). I picked her up and felt her little body being scared, she held on to me and tried to hide in my hair :(
After that I found it very hard to make her loose from my shirt and put her down again, and to leave. I know she'll be fine soon though, she wasn't completely terrified when she was alone and she's a brave little girl. It's also better for her to be there now, so she can play with other cats, get used to a lot more people and pick her new staff.
But it really feels weird seeing her room here now, and I miss her a lot at the moment. I will go back to the shelter to have a little peek at her when she feels more at home, so I can have that image in my head as last image of her instead.

After leaving Evi at the shelter, I went to a meet with some of the people from Fok! forum's nail polish topics.
I didn't know any of them (besides seeing some pics), so it was pretty scary tbh, but I'm glad I went! I had a great time and it was a nice distraction from leaving Evi.
Imagine 12 nail polish girls, loads of polish stuff, 1 guy (poor him) and a dog in an awesome garden with a bar and lovely sitting areas :) We all brought some food/drinks, and one girl made Oreo pralines, nom!
Carla from Nailpolish Fashion was there as well, she brought me some polishes I ordered with her the day before, and I also swapped a few. I was drop dead tired when I got home, but it was great, I'd definately go again and yay for new polishes!


Now, enough random talking, NOTD time!
This is one of the new polishes I got yesterday, China Glaze Hey Doll from the Vintage Vixen collection.
I thought it would be a rose kinda color, but I find it's more brownish with a rose glow. There's no sun today so I don't know what color it is then, but so far I like it :)
It's a bit calm and low profile polish, but I have such days as well and I think I'll enjoy this one in the fall.
I used 3 coats and a layer of top coat, the drying time and application were fine. 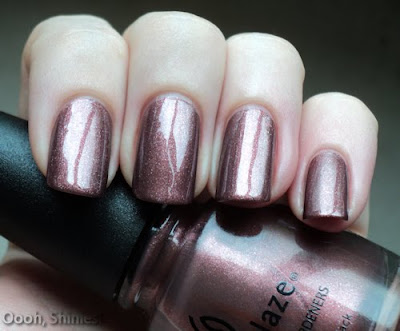 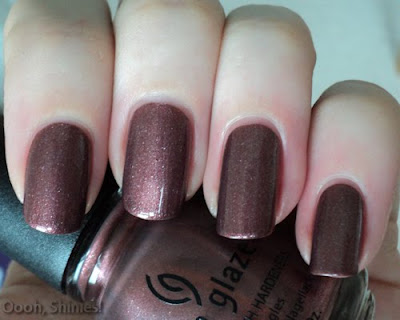 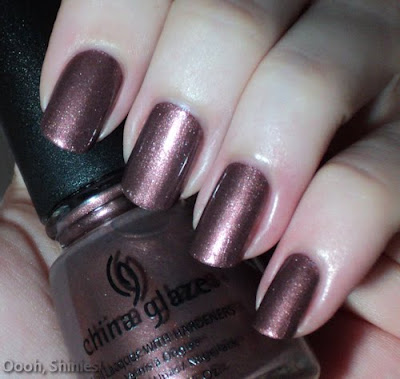 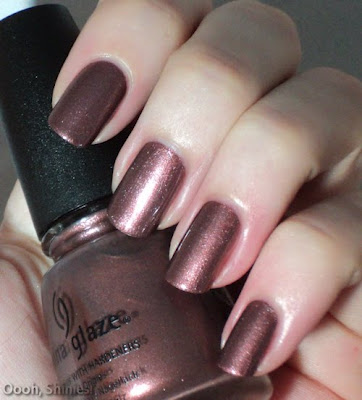