Hi all! It's been a while, I'm not really into blogging atm. I'm just in the mood to wear either no polish (ya really!) or some of the polish that I've already shown here once or twice, so I'm just enjoying those pretties again without posting them. So that's why you haven't seen me around much :) But the last few days I've been busy making polish rings, and I did want to share those with you!

I wanted to make jewelry with polish for ages, but it didn't look as easy and cheap with all the stuff needed. But then I saw this great tutorial from Rebecca Likes Nails, with a different and easy way to make them, and off to eBay I went! I'll have to order more rings though, I had them filled in no time and I want to try stamping some as well, so that'll come next time :) And really, if you were doubting about making some jewelry like this, go for it! It's fun, easy and a great way to wear even more polish! =)

My camera freaked out from all the sparkles, the holos and the duochromes, so some look a bit blah here. But to give you a bit of an idea, here's what I made: 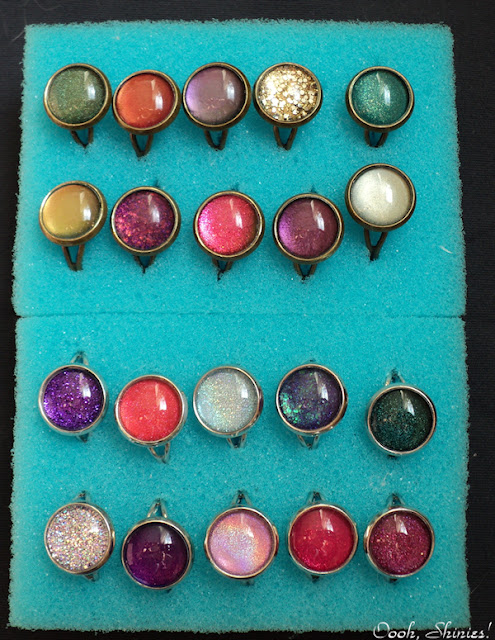 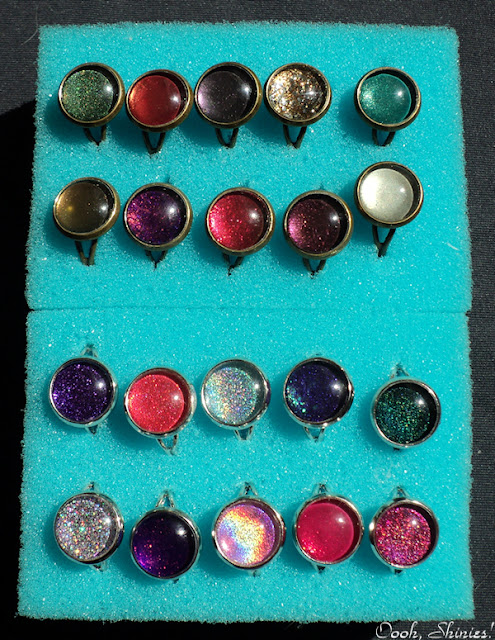 I think you'll see some of them on their own sometime as well (or when I'm wearing them), because it's a lot easier for me to capture them like that. But here's one of them already on itself, Nfu.oh 51...love love love! Seriously, does this look awesome or what?! 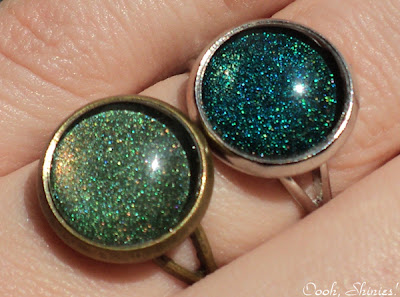 And just a few tips if you're going to make some, in the tutorial Rebecca says you have to wait till your glass cabochon is totally dry before glueing it on, listen to that :P The OPI TSMGO! ring was the last one I made and I thought it was dry enough so I didn't wait till it dried completely, and now it misses a tiny bit of polish on one side. It came out from in between the ring base and the cabochon when I pressed the 2 together! Luckily it's not so visible, but I know it's there and I dislike that, haha. So that one I don't like as much, and the one with Million Dollar Baby is my least favorite, but I adoooore the rest!

And if you used too much glue, like I had a few times, take a hobby knife and/or a needle, add some patience and scratch it all off. I was worried the rings or the glass would get scratched, but they didn't :)

Thanks for looking and have fun if you're gonna make some as well! ^^
Geplaatst door Bregje op Monday, May 14, 2012
Newer Post Older Post Home