Morning all! Ahh what a lovely sunny weather it is today, I really missed that big time! I think it won't take long now before you'll see a lot of pastels, neons and holos everywhere =) It's been a while since I did an IG compilation, but I mainly post my nails there, which you see here as well of course. I often plan to share more there, now I just need to remember and actually do it, haha. Hope you'll enjoy these compilations anyway :)

One thing I do share more are my cats! ♥ 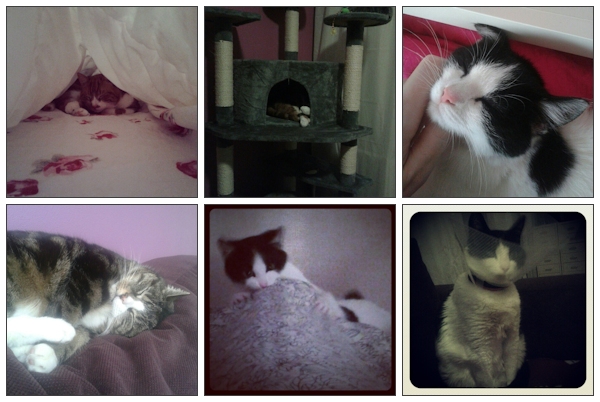 1) Dewey likes to sleep under my duvet, but at times he actually goes inside the cover instead of under the whole thing. He's always so warm and cuddly there :)
2) After I moved here, I gave them one of those high scratching poles. It took Dew some time to adjust to the new house, but when he went up high in that thing, I knew he'd be fine again!
3) Fosterkitty Salla when she got all cuddly on my lap. She got adopted and last I heard, she was doing great! I think it won't take long before the kittenseason starts again, and my kitten blog will of course get updated when I have kittens again.
4) Some things will never change and Sue slacking is one of those things!
5) Salla loooved wiggly toes, haha!
6) My poor Bindi had a tumor under her frontpaw in her armpit and recovery took ages. She took off the petshirts and wouldn't stay off her wound, so she ended up with one of those collars. Horrible for both of us, at first she wouldn't eat or drink anymore and a few weeks later she adjusted more to it but became very snappy to me. I'm SO glad she's fully healed up now and my sweet girl again! Both Bindi and Sue will get their checkups soon, they both had a big, aggressive tumor, and I hope everything will be (and stay!) fine. 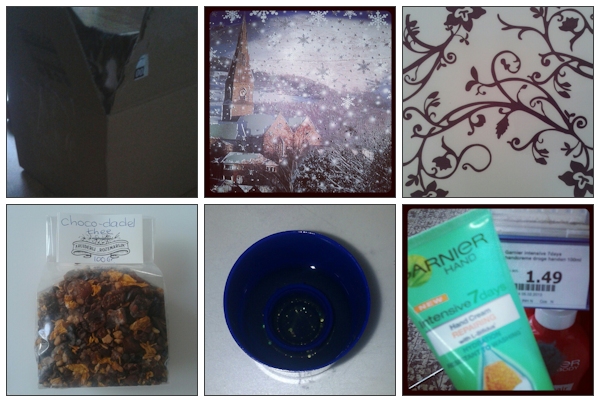 1) Sue loves boxes! Especially when they're of the easily chewed kind, then she shreds them to pieces. Cute to see, less cute to clean up, haha.
2) The first Xmas card that I got last year was actually from a fellow blogger, Joanne, that was so sweet of her!
3) I used tilestickers to make my toilet look nicer, I used this dark purple print on the top row of the tiles there. For my Dutch readers, they have them at Xenos.
4) I got to pick a free bag of tea, and I'm not sure what I was thinking, but I went for chocolate-date tea. I love both, but I quickly found out I should stick to eating them, yuk! >.<
5) Swatching glitters, remover in the cap with glitters sunk to the bottom. Oh so sparklyyyy!
6) The el cheapo store Action was selling these Garnier handcremes for €1,49, love it! It does leave a bit of a layer on my hands, but not a greasy layer so I don't mind. 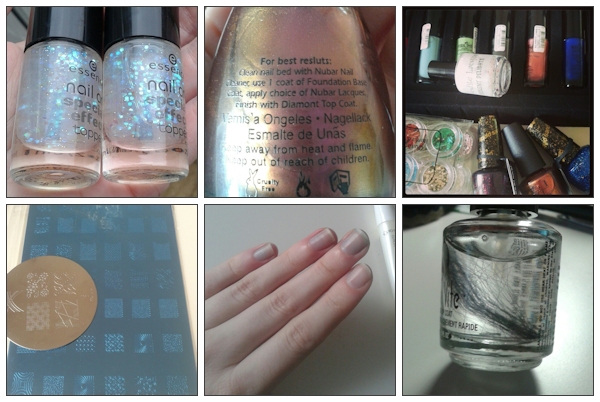 1) I spotted a new Essence glitter polish and brought home 2, one for me, and one for a giveaway later on. Pretty colors!
2) Never noticed, Nubar had quite a few spelling errors on their bottles, starting with resluts! I thought I had a fake for a moment, but turns out most of my bottles have typos and I read more people have noticed it as well.
3) During moving the review stuff kept piling up! It's fun to do reviews, but I'd rather do them straight away to prevent this, lol.
4) The plate that I showed the other day arrived, I placed a Konad plate on top to show how tiny these images are!
5) My stains finally grew out, and then I swatched an Essence polish without basecoat. Oops! Luckily the blue came off fairly easy, but that did get me bummered for a moment, I'd rather not have Smurf nails!
6) The SV that I ordered arrived with the brush floating in the bottle, ehm... The webshop did send me a new one, but I doubt this happened during transport, so I'd go for a different webshop next time!


I hope you all have a lovely day, thanks for looking! ♥
Geplaatst door Bregje op Monday, March 04, 2013
Newer Post Older Post Home