Goood afternoon all! When I showed the preview of the new Essence products, I already mentionned I was curious about the Sparkle Sand Effect polishes. And as you maybe saw on my Facebook or Instagram, I found them in the store the other day! I quickly threw them in my basket and somehow managed to resist buying more goodies, but I suspect some more stuff might end up in my stash sooner or later :)

When I got home and tried the sand polishes on swatchsticks they looked good, not as rough and gritty as some other brands, but a nice sandy result nevertheless! But then I tried them on my nails... I think letting each layer dry before applying the next gives the best result with textured polish, but I waited and waited, aaand waited some more. After that I could still easily make dents in the polish, and if I wasn't careful, I would've gotten big smudges I'm sure. Not impressive at all! But are the polishes making up for that? Let's have a look at the swatches! 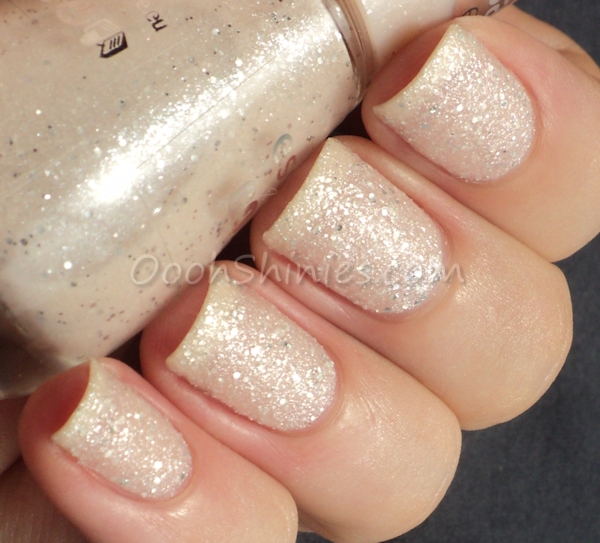 First up is Hey, Nude! I used 3 coats of this, it has a light beige base with silver glitter and very fine silver shimmer.
As you can see, there's still Visible Nail Lines! I usually don't like VNL at all, but somehow it didn't bug me too much with this polish. It's my first softer looking sand polish, and I do like the result, but I would've liked it a lot more without the VNL. I'll probably layer it on a 1-coater next time, think I might love it then! 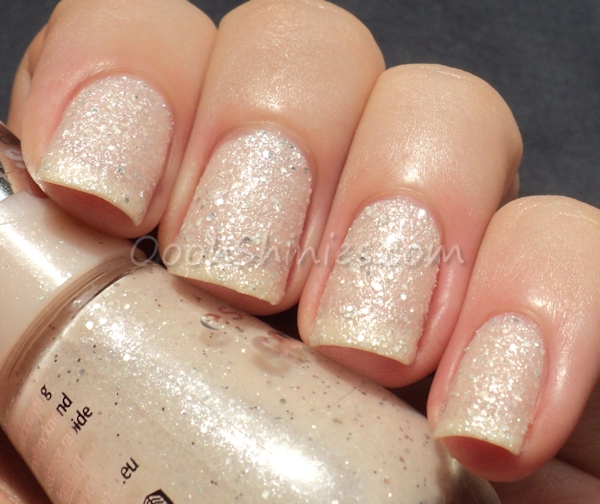 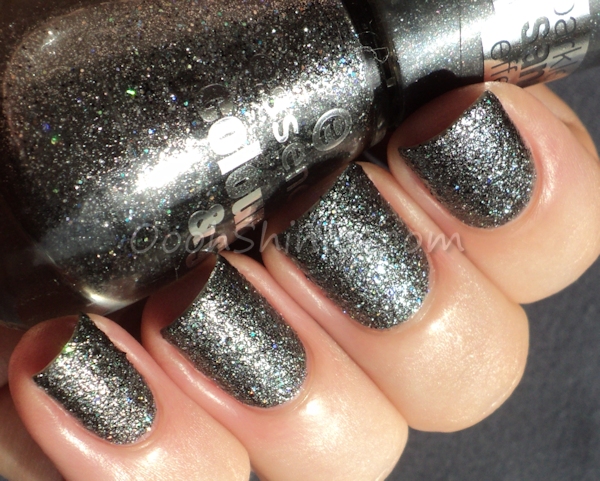 Next we have Here's My Number, 3 thin coats. It's a dark grey base with black and holographic glitters and a fine silver shimmer.
The holo glitters are much more visible in real life! On my swatchstick it now does look and feel more gritty (and it looks great, might I add!), next time I might try quick dry drops or spray if it dries slow again. I think those quick dry products will reduce the grittiness a bit as well though, because they have oils in them as well, but it's worth a shot! 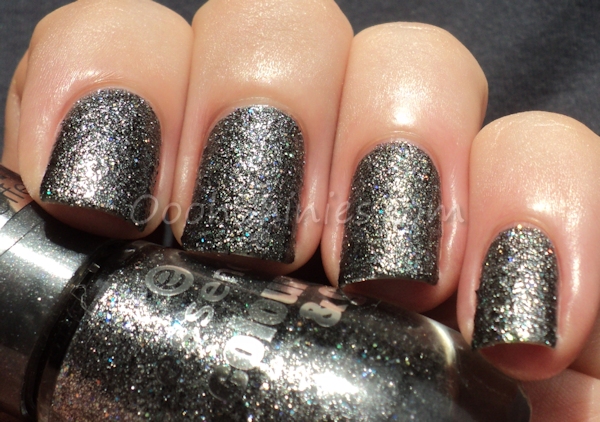 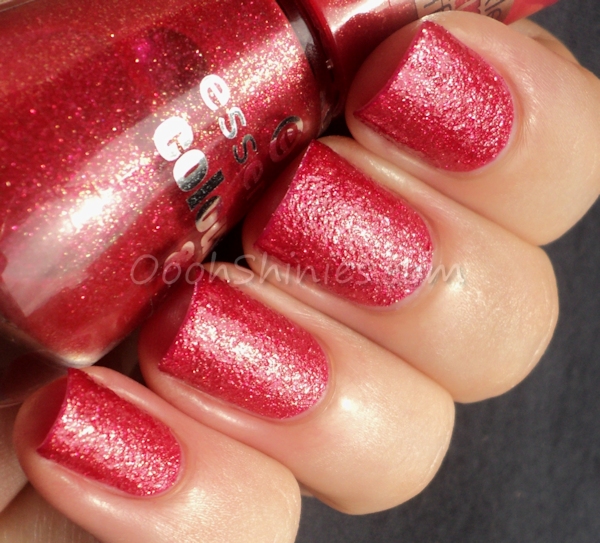 And the last one, Me & My Lover. Again 3 thin coats, it has a pink base which builds up to a red/pink color, and it has gold and dark pink(?) glitter and shimmer.
I was really looking forward to this specific color, but on the nail, it's the least of the 3 for me. I swatched this last and let it dry the least though, and again, it looks much better on the completely dry swatchstick! So as I said before, I'll try them again sometime, and this might end up as favorite afterall then. And maybe I'm just too spoiled by the drying time of OPI and Kiko sand polish? I'm not sure, and I know I'm whining a bit about the drying, but these would've been so awesome if it wasn't for that! 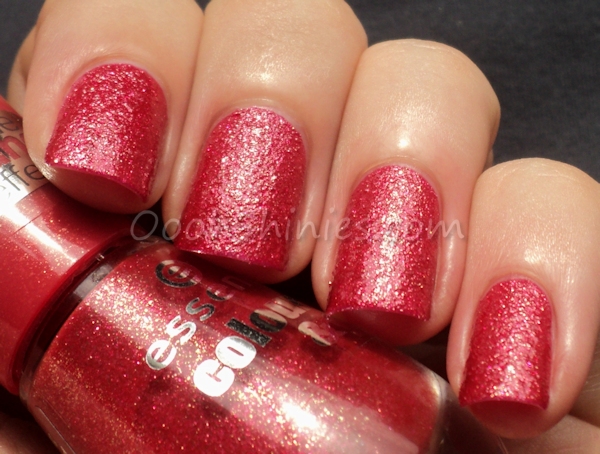 Then I remembered a comment on Facebook from Anne-Marieke, who said that she really liked the result of one of these with a top coat. So I applied my beloved Seche Vite and OHH! Look at that! 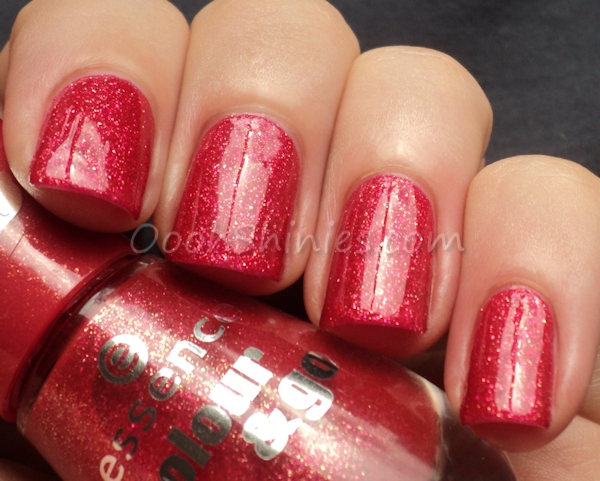 Mmm so sparkly and rich! I really do hope I'll have a better experience with these polishes next time, but if not, I know how I'll be wearing them instead :) 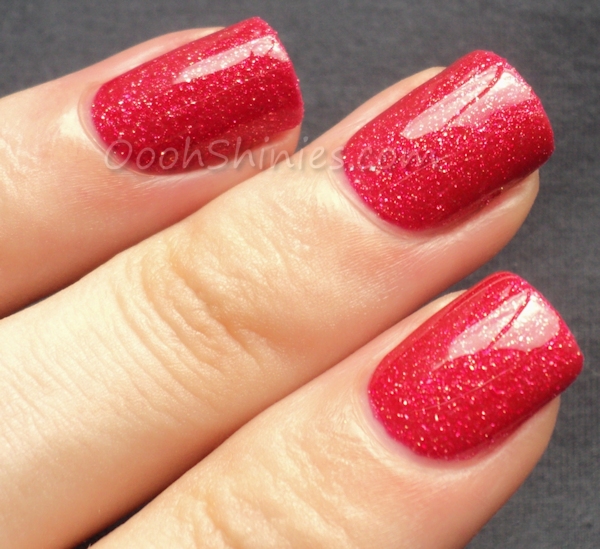 Well, there you have them, the Sparkle Sand Effect polishes! What do you think of these, yay or nay?

Thanks for stopping by ♥

Edit, moderating comments that mention the polish Hey, ****! A while ago I had some issues with the ads on my blog, turns out that specific word was used 3 times and that caused all the problems, lol! Since then I also refer to polishes like that as beige, although on Facebook I got some nice suggestions from Martina, which gave me a good laugh: "Skincolored? Human-hue? No-clothes-on color!", haha. Anyway, I really love reading your comments, but I hope you understand that I'll just edit that word to prevent further issues :)
Geplaatst door Bregje op Monday, August 19, 2013
Newer Post Older Post Home