Morning all! The other day I wanted to go for a geometric design in black and white, but as soon as I did the first nail, it reminded me of a football! Now I don't care about football, but a very dear friend of mine does, and he also thought of a football straight away. So I thought, I'll do a mani for him, and get some inspiration from his fav club, Liverpool :)

I wanted to do an accentnail inspired by one of their shirts, and I had 3 options for that, their home, away or third shirt. The home shirt screamed stripingtape to me and I wasn't really in the mood for that, so I went with the away shirt, a dottingtool and some greys and red polish. But the result turned out soso, so I removed it again, and I picked the third shirt instead. I'll show you that further below! After I was done with that and started to take the mani off, I thought oh why not, and went for the home shirt afterall :P So my ringfinger got re-stamped, my accentnail got done with stripingtape, and that's why I have 2 variations to show you! 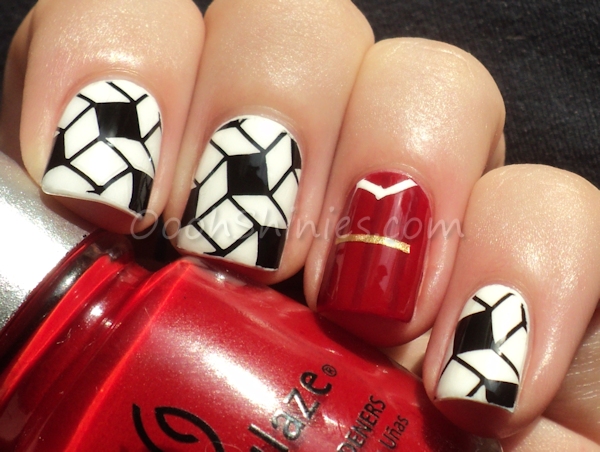 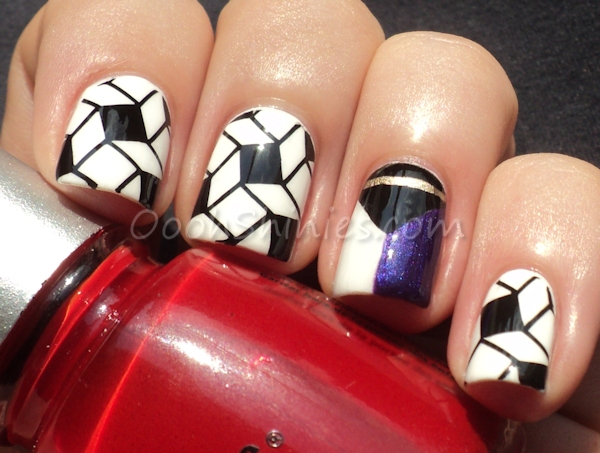 And here's the inspiration for these accentnails:


I did the third shirt first by starting with a white base, then I added some tape and colored in the blurple (over 600 polishes and not a single creme that matched well, what's up with that! Haha). I then took a nailart brush and colored in the black, which went surprisingly well. But freehanding the golden stripe got a little bit messy and I had to go over it again with black. I really hope I'll be able to freehand better someday!
After that I went for the homeshirt, started with a dark red base and used striping tape to create some stripes with a brighter red. Then I used more stripingtape to create the golden stripe and the white V, but the latter got a bit messy and, dare I say it, freehanding was probably a better choice there. By the time I was done with that, it was too dark to make pics, so that had to wait until the next day. And by the time I did, I already did some household chores, hence the slight tipwear on the stamping. Oops! :)

And because I know that Liverpool is playing today and I'm sure my friend will read this, I hope it's a great game and that they'll win, gogo Liverpool! ^^

What do you think of the result? And even though it's no hexagonal design, does it remind you of football too? And as I type this I finally remember what plate it is that dóes have one of those, would've been even better! In case you'd like to do football nails as well, DRK-A has a hexagonal image!