Good evening :) I haven't posted nails in a few days now, me and grey weather isn't the best combo, and I've been busy with foster kitten Basil as well. I know some of you love seeing him, and I've been slacking badly with updates, but remember that terrified kitty hanging in the top of his cage? Well, not much left of that poor little guy! :) Instead I'm now having a crazy energy rushing through my house! He improved so much faster than expected, but last week he didn't improve much at all and started to dislike me it seemed, and I suspected that had to do with the bench (some animals like a bit of private space like that, he clearly didn't!). So I took away the bench, and gave him a small room upstairs instead, where he only has to spend the night now. After that he straight away liked me so much more, and he's a lot more cuddly since as well! He still has his moments of running away from me, today was a worse day as well, if it's up to him he's never locked up. But me, my cats and my house would like to get some rest during nights, lol. But besides that, it feels like we're working on the finishing touches already to get him ready for adoption! Basil will have plenty more to learn, and we'll find him a suiting home where he gets that opportunity as well :) But my job is almost done already, yay for Basil! Here are some pics to show how he's doing!


Dewey always likes to hold on to the kittens when he washes them :) 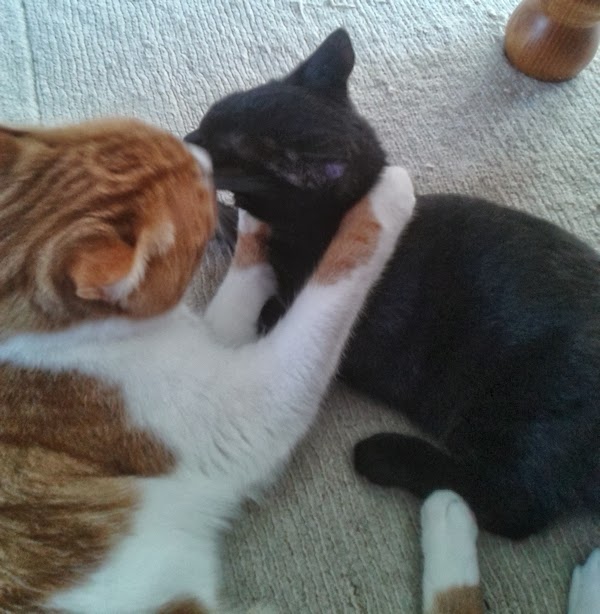 Oh you silly, silly kitten! I wasn't sure where Basil was in his bench, until I saw something weird about the hammock... 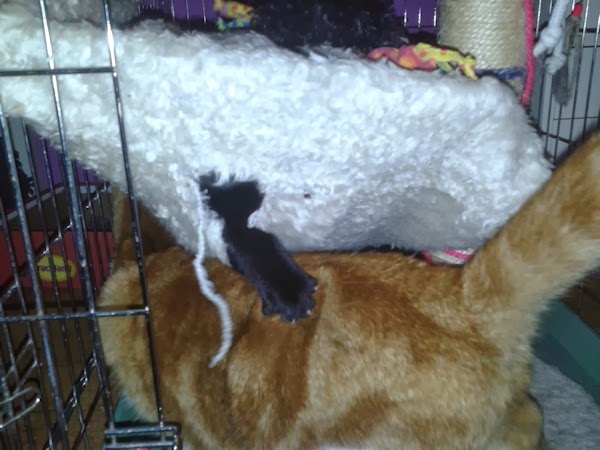 He went in from the top, but that hole in it was quite amusing! We couldn't get near him, he'd attack so fast, and he had a blast (and so did I :D) Dew didn't care about that paw poking him, he was looking for kittenfood :P 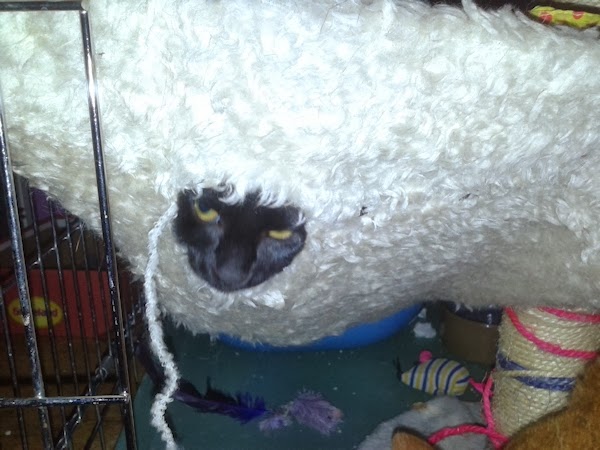 He got to snooze a little with Dew, which is quite uncommon, and he loved it :) 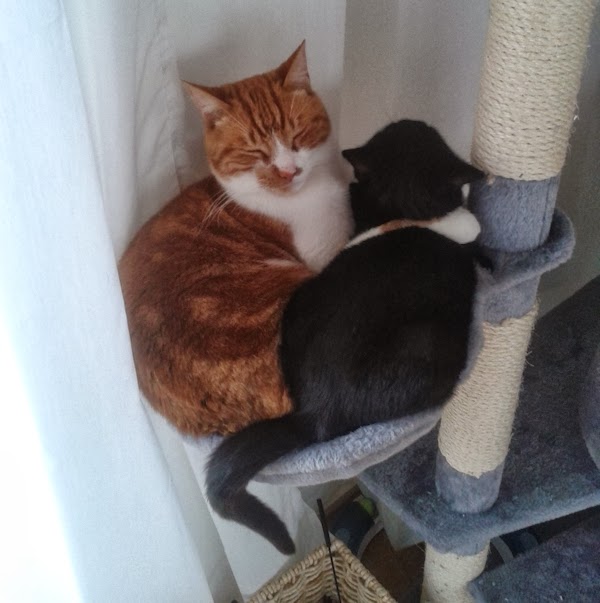 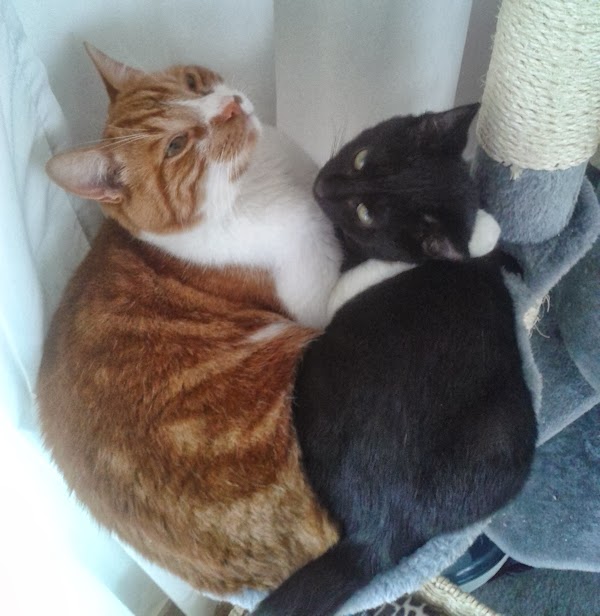 Cuddles on my lap ♥ 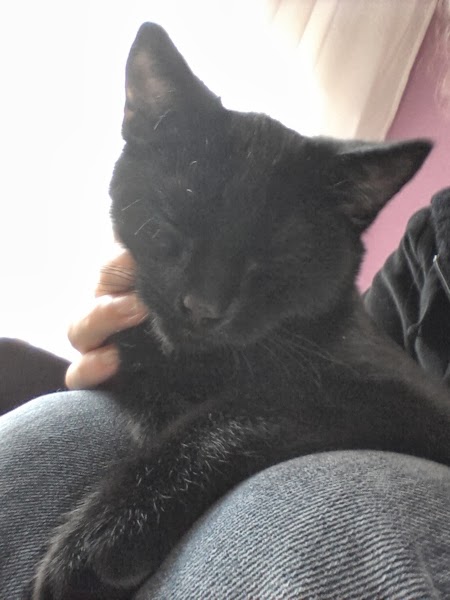 His favorite toy is a crumbled piece of paper 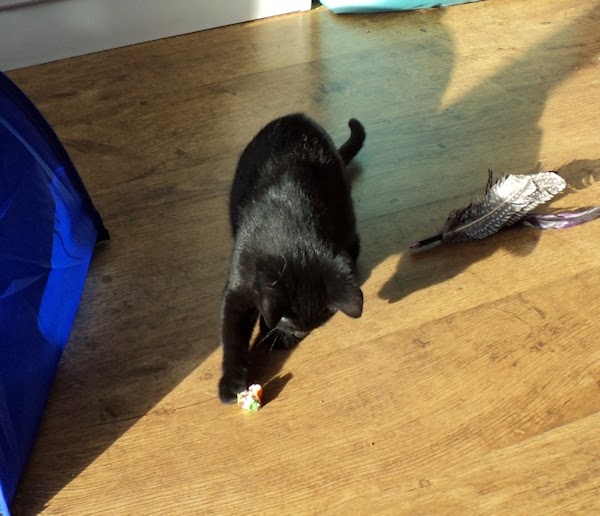 Accidentally ran into Sue, oops! Sue isn't loving kittens so much, to put it nicely >.< 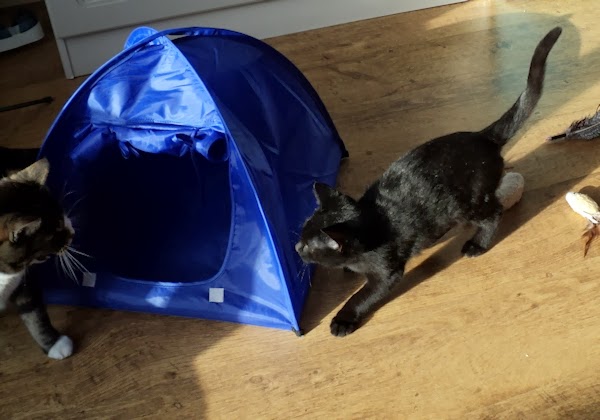 Posing pretty, too bad there was some hair from Dewey stuck to his face! 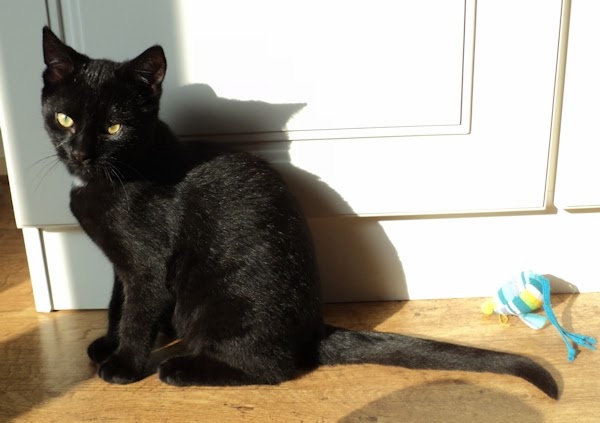 He isn't completely black, besides a white hair here and there and a tiny white spot on his chest, he has some hairs on his back which look like they're dipped in a dark silver or some. Not always visible, often he just looks black (very handy at night I noticed, haha, I'm so used to having cats with clear white spots!), but at times you can clearly see tabby stripes in dark silver and black on the back of his head. Tabby in disguise it seems :) 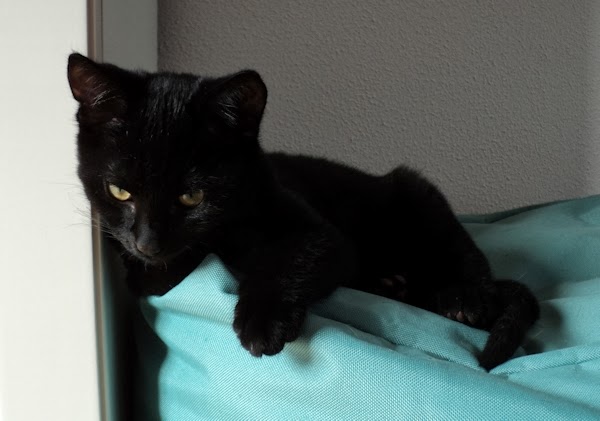 Dewdew doesn't get a lot of privacy, Basil's always eager to join him, like here on a chair 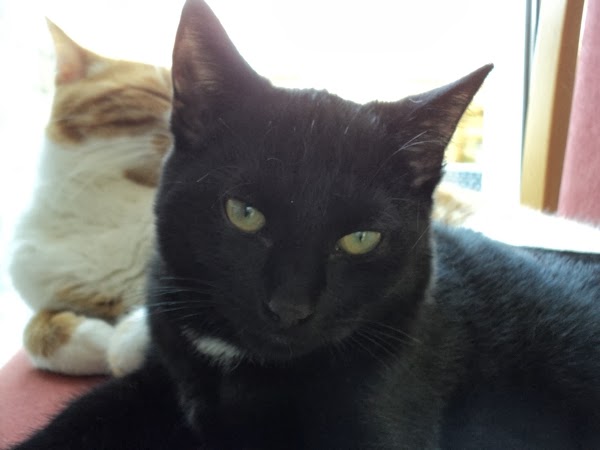 Well, I guess these pics clearly show he's come a long way already, I'm so proud of Basil!! :) I'm not sure how much longer he'll stay though, I'd prefer to have him adopted from my house, but right now there are some things in the way of that I'm afraid. So will see what happens, where we go from here, but regardless, it's been a wonderful and such a rewarding experience so far ♥