Evening! Here's a quick post with a mani from the vault. Black base, silver stamp (with an image that I might just never ever use again, what a horrible image to get straight on all nails!) and some studs on the accentnail. 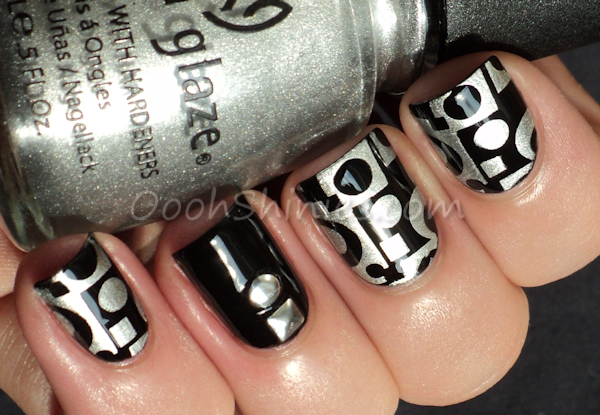 Essence Black Is Back stamped with China Glaze Millennium and Konad m65, studs from BPS. 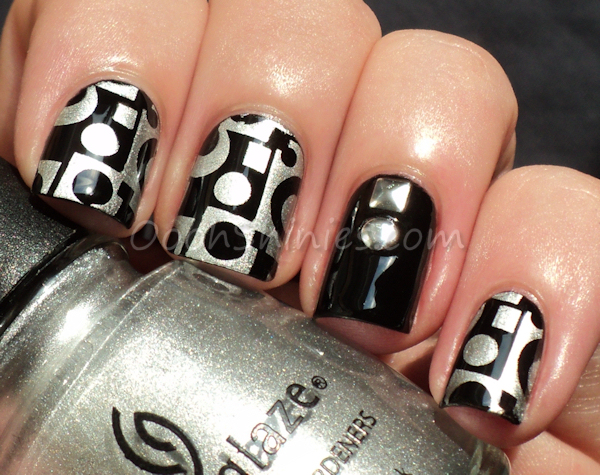 And here's a little kitten update: the other day I asked for positive thoughts for the kitten with the blue ribbon, Tristram, or as Lilo called him "little no-can-poop". Still giggling about that one! I'll spare you the details but he's doing much better, and you guys were very kind, thank you for that! But now I'd like to ask for positive thoughts again, this time for another kitten. Little guy Perceval (I'm sure it's clear where the inspiration from the names came from :)) isn't doing so well :( He was a bit wobbly on his legs from the start, but they all were (so cute how tiny kittens move around and can already fall over from just shaking their heads too enthusiastic, lol!), so I didn't notice it too much. But last few days they really took a big jump forward, which is awesome to see of course, but it also pointed out that his wobbly backlegs are much worse, and it feels like it has gotten worse over the last few days as well.
I filmed it, and the vet and shelterstaff thought of something neurological straight away, and right now there's not much we can do besides support him with specific vitamins and just hope for the best. The vet explained a little about what it could be, and chance is that he'll grow over it and will end up just fine, it should start to improve in the coming weeks. But the vet also warned me that it could possibly be a symptom of other things, and that it could quickly take a turn for the worse. There's a few more little things about him that could mean nothing at all, or could mean more, and needless to say, I'm worried like mad about him now :/ Just wanted to share a bit, I hope my next post will have a positive update on this cutie!

Have a fabulous weekend and thanks for stopping by! ♥
Geplaatst door Bregje op Friday, May 30, 2014
Newer Post Older Post Home