Hi lovelies! Yes, I said today's post would be another multichrome , but after sorting out a lot of kittenpics yesterday, I figured to share some of those here again :)
I'll start with Mobi - and his new little friend! But I'll also post some other kittens further down, I worked with some other fosterhomes to help with their photos to hopefully help the kittens get adopted quicker. I've done 1 of those little shoots at another fosterhome, the rest we combined the other day in the shelter, when the vet was there and they had to be there anyway. The result is obviously not as great as you can achieve in a safe environment (although some kittens didn't care much about the strange room and vet and all that, haha), but with a camera instead of like a mobile phone, the photos can turn out nicer nevertheless! Hope you'll enjoy seeing them too, but I'll add them below a jump so this post won't become as huge!

But first things first, Mobi! Mobi was so over the top playful and disrespectful to Dewey, that I discussed with the shelter to possibly return Mobi. But it's of course nicer for him to be adopted from my home, so we decided that if the shelter would get in a kitten around the same age, we would see if they could become friends and he would leave Dew alone more. So on Thursday the shelter contacted me, they had 1 hyper kitten of 14 weeks and 1 slightly scared kitten of 8 weeks, which is Mobi's age. Now Mobi's hyper too, all kittens are active but some kittens just add a bit more to that, he's definitely one of them :D But I was worried another hyper kitten that's so much older, could perhaps be a bit too much, especially since Mobi's surgery area played up a little the other day. So I went with the slightly scared kitten, who quickly showed here that's he's pretty scared, poor thing didn't even dare to move when Dew sniffed him! :( And Mobi? Turns out that little muppet can growl and be bitchy too, lol! So much for a little friend for him, haha. Luckily they did improve a lot since then, and this morning Mobi wasn't sitting at the front of the bench meowing at me, he was too busy jumping Colin, yay! And if that's not enough, he'll get a visitor on Wednesday, fingers crossed that it's a match!! Right, enough blabbering, photoooos!


Yes, Mobi really does loves to play, why settle with 1 mouse when you can have 2! 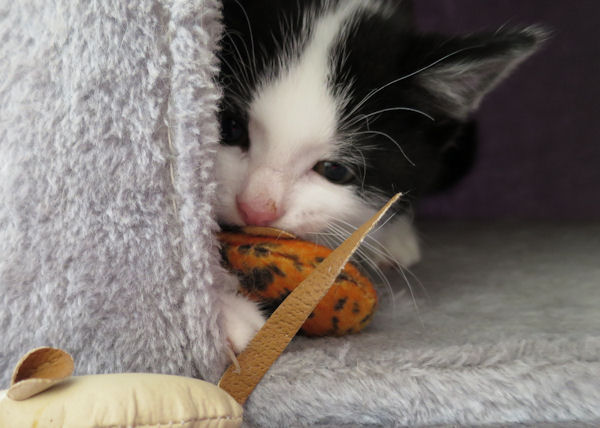 But with a little patience, he'll show he's quite a model too :) 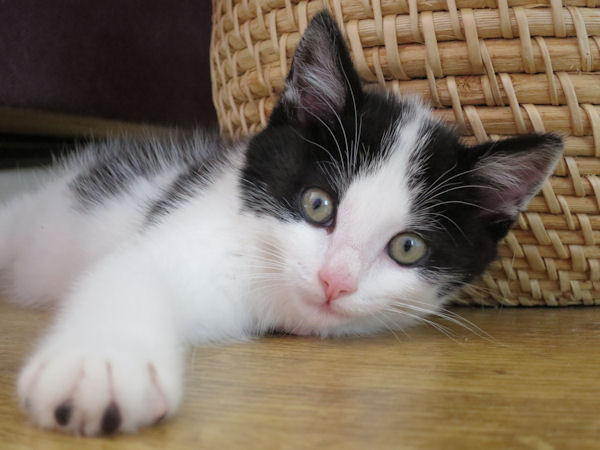 And then it's back to playing again! 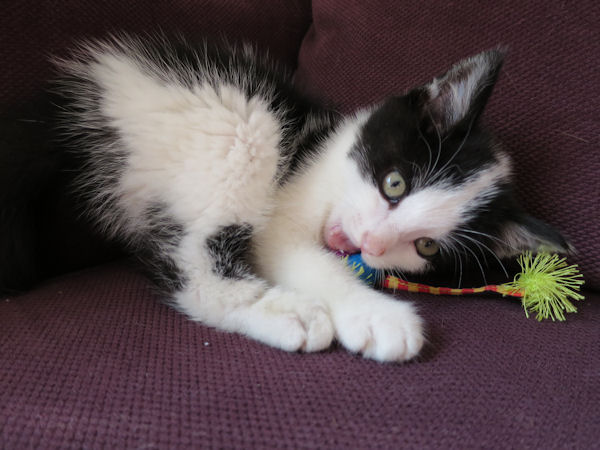 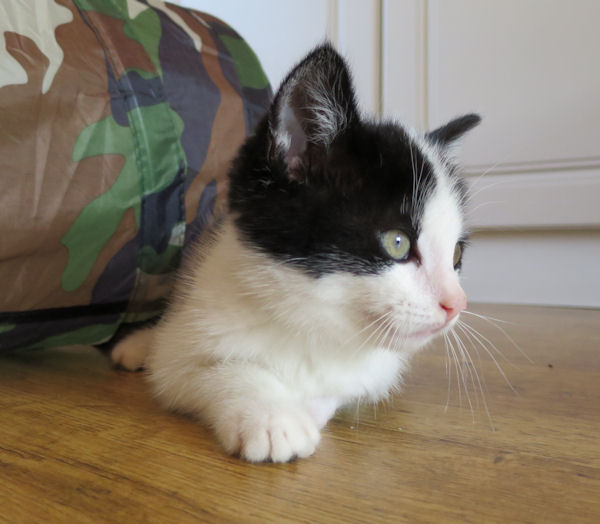 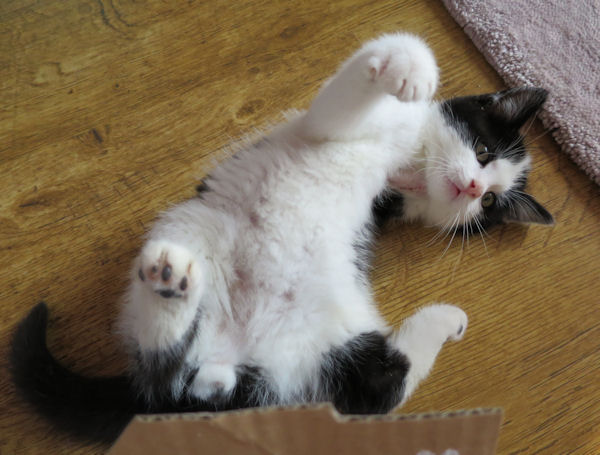 Yep, rolling around is fun too ^^ 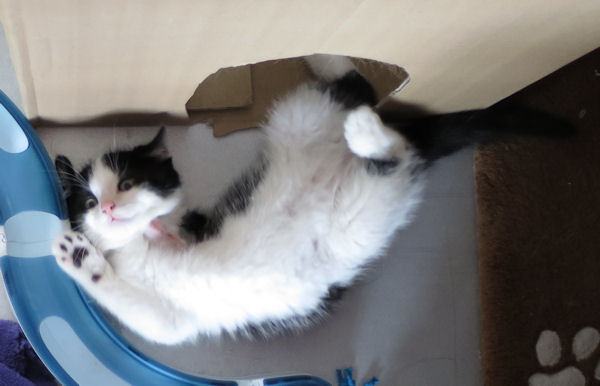 And here's Mobi playing with Dewey, poor thing just wanted to snooze, it was well over 30 degrees that day. Mobi does this allll the time, he keeps jumping Dew's head and body, slapping his paws, you name it! Dew became a bit rougher with him now too, but do you think little Moobster cares? He makes nasty sounds, hisses, and then quickly runs off when he gets out of those big paws. But then he stops like a meter away, sits for 2 seconds, and charges Dew again! My poor boy is really tired of it by now, and I can't blame him at all. That little ball of energy is just nuts! :D 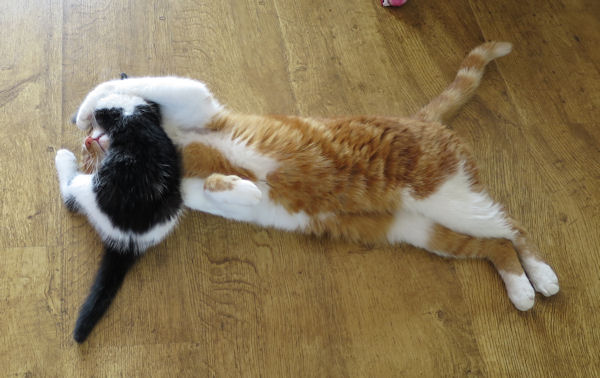 And meet newcomer Colin! I called him Colin, since he was found at a restaurant in our town with a very similar name, so he's named after that. And I figured a little bit more posh name would match this beautiful little guy!
He was absolutely terrfied when he arrived here, he was found that night, brought to the shelter, there they checked him over and deflead him with spray (as you can see on his fur), and then the animal ambulance brought him here again, where he got caged up in the bench. Poor little creature :(There's a blanket over the bench although that doesn't show as well here, to help him feel safer. I took this photo a little while after he arrived, I'd say at least an hour later, when he finally dared to follow Dew with his eyes. Before that he just wanted to crawl into the walls and his eyes were even bigger than this :( Dewey's being absolutely brilliant with him though! ♥ 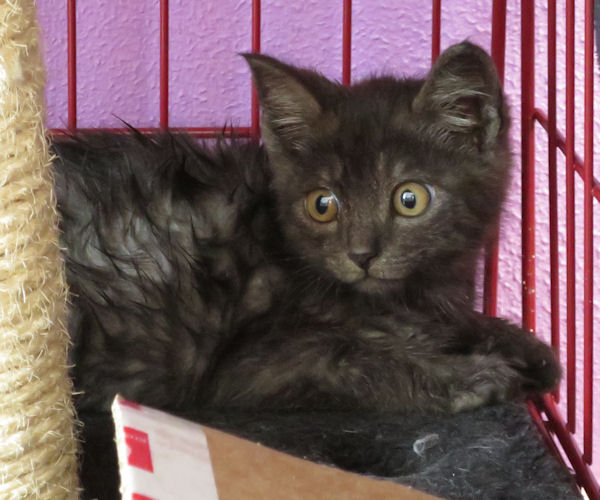 I left him alone for some time, then started working with him, and I used Mobi to help Colin relax a little! It took a full basket of toys and Mobi running around like mad, but in the end he dared moving out of his safe corner a tiny bit to see what that black and white thing was doing! 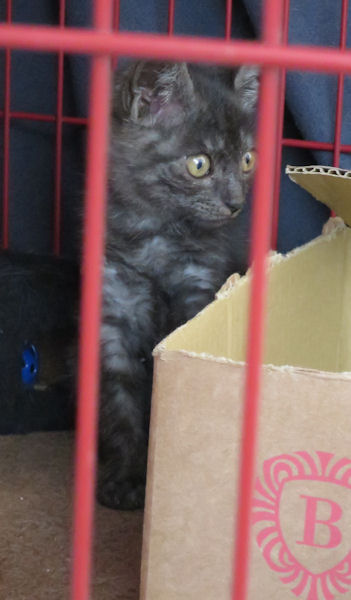 And in the mean time, every time he dared looking at me, I blinked slowly with both eyes, and talked to him the whole time while I was playing with Mobi. The result? He blinked back, which was a big step already and my goal for the day, get him to relax just a little bit. Isn't he gorgeous? ♥ 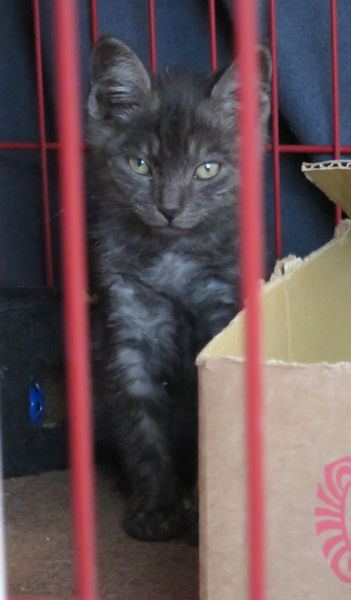 I don't have more pics of Colin yet, he enjoys hissing at me but secretly he does enjoy being petted too! He now also knows that hissing won't scare me off, and I know he won't attack, phew! First time touching was a bit scary, haha, but worth a risk seeing him relax :) And he already plays a bit, and he and Mobi are a bit more friends since last night too :) I hope he turns around quickly, so they can both be out during days, right now he'll just flee and hide if I would let him out. To be continued... :)

Check below if you're interested in the other kittens too:
Right, let's have a look at the other kittens! I do hope you'll enjoy seeing these as well! They're not my fosters, but cute nevertheless so I figured to share them anyway :)

So here's 2 little ladies first, one of them was a normal size kitten, the other one was like a miniaturekitten! Not skinny or any, just really small, and boy did she love to model! The other girl was a bit impressed by it all at first, took a while before she felt secure enough to relax more. It was near impossible to just choose 1 pic of each of them, but I'll post the whole series on my fosterblog :) 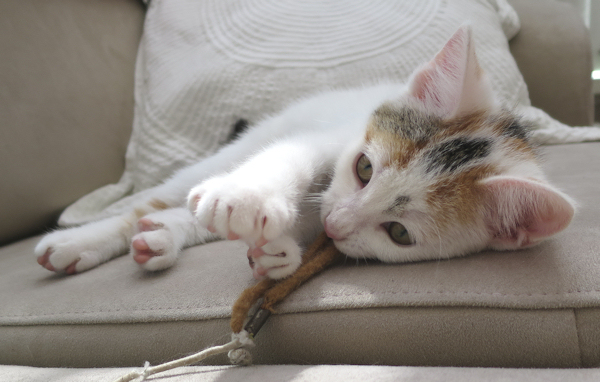 Top is the girl that needed a bit of time, bottom the mini-model! 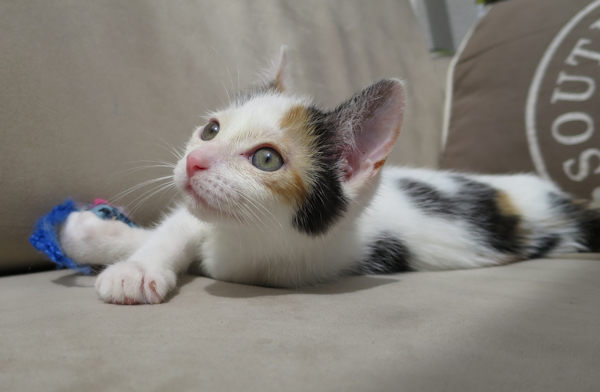 Then at the shelter, they had 1 catroom empty, so plenty to see and do there for kittens - but also plenty spots to hide. So I decided to keep them higher up, on one of the shelves on the wall, they're there for cats to go up high, but also seem to work for these kinda pics, haha! Too bad of the background so to say, but I can't tell them to sit still in a nice little basket of course :D Again, all pics will end up on my fosterblog :) I still see points to improve on with these photos, my focuspoint for example was off here and there, but ah well. Twas the first time and they won't be shown full size online, which makes it less obvious anyway, and better luck next time!

First is this adorable little guy, he looked so funny, and he didn't care much about it al either :) 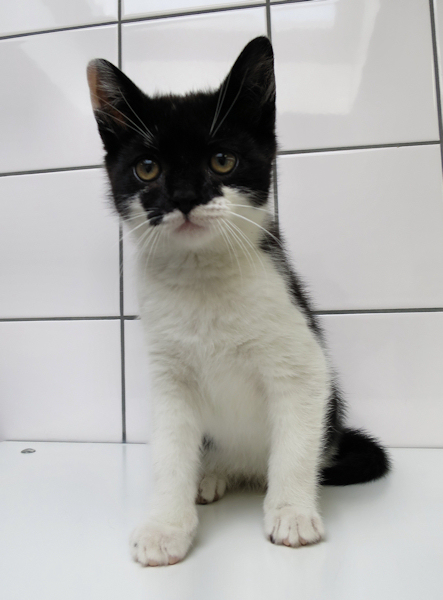 Next we have this girl, she was near impossible to capture! She just wanted to discover the entire room, and I ended up with moved pictures all over the place, haha! 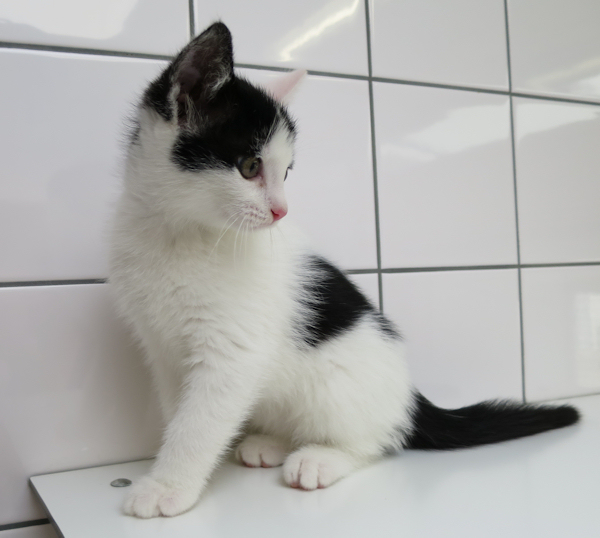 Then we had 2 little brothers, too adorable! 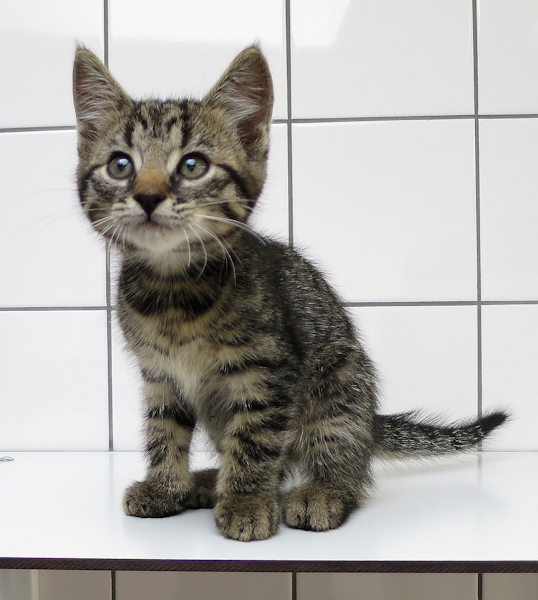 Especially this one stole my heart, such a beauty, and I have several funny pics of him ♥ 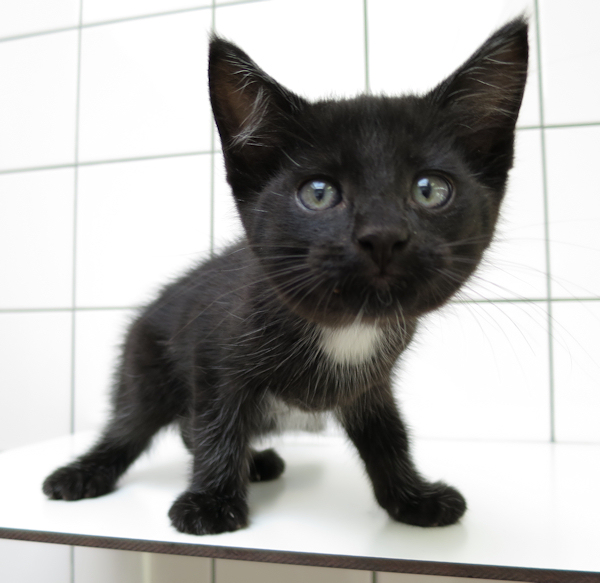 And lastly, a mum and her 4 kids. The kids were very impressed by it all, as you can probably tell, and I don't have too many nice pics of mum either. I could tell she was interested in things but also slightly on edge, so I didn't wanna keep clicking and bugging her. She sure did raise 4 pretties though! :) 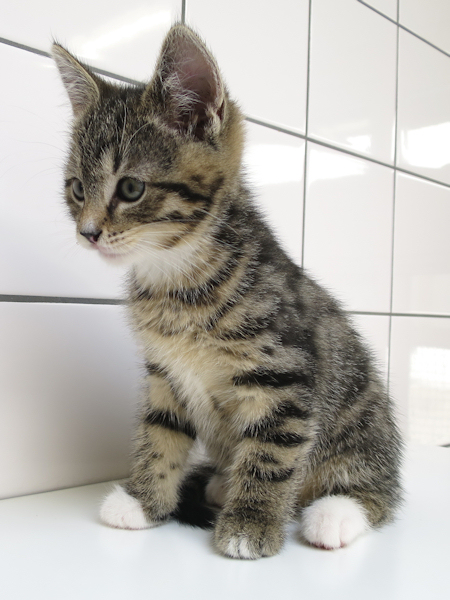 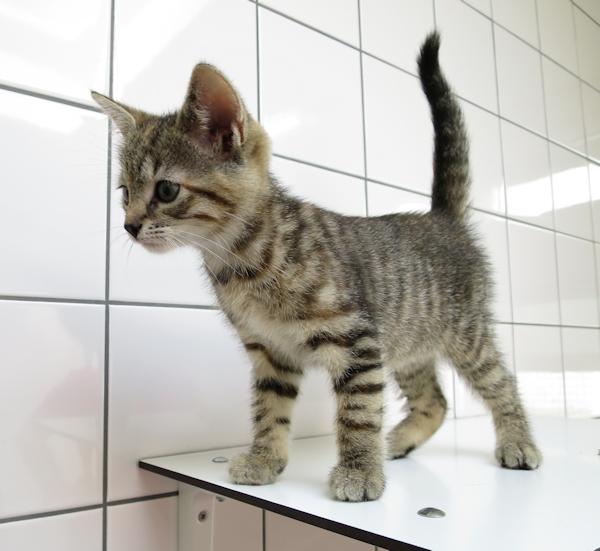 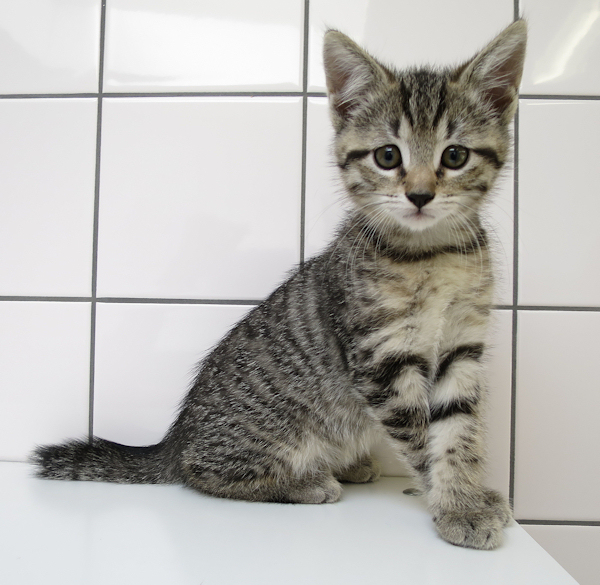 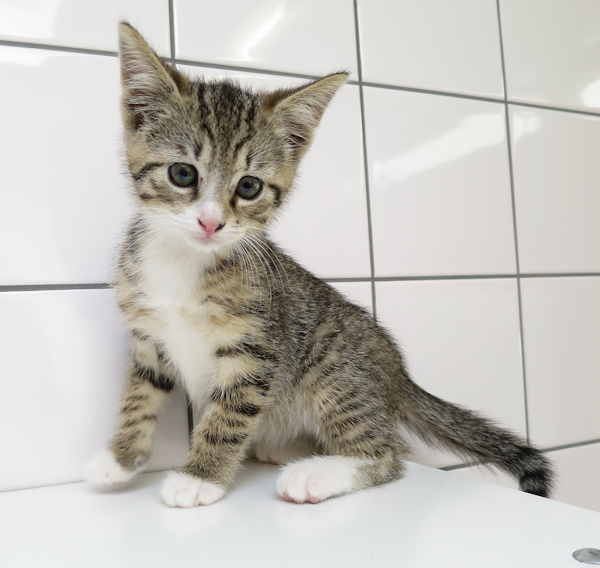 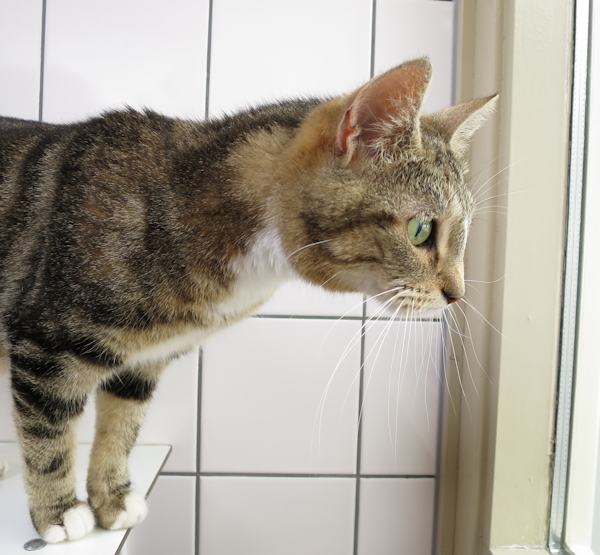