Today is a bit special for me, it's Sue's 12th birthday :) I normally don't celebrate my cats' birthdays, in fact, I'm not even sure on their real date of birth, since they're sheltercats and they estimate their age and pick a matching date. But I knew Sue was from October, and I looked it up the other day, they put her Bday on the 3rd which is today!

Sue came into the shelter early 2003 and I couldn't help but falling in love with that chubby kitten with the little head and big eyes, that started to knead with her paws as soon as someone walked in the room ♥ She came home with me and has never stopped being what I fell for in the first place and she's always been such a sweet and cuddly cat! But a few years ago I wasn't sure if she'd be with me much longer. In 2011 Sue had a tumor removed, which turned out to be much bigger than we expected and was an aggressive form of cancer, and the chance was very big that it would come back. About 1.5 years later my sweet Bindi was diagnosed with cancer as well, and it turned out to be pretty much the same kind of cancer. In her case it came back within a few months, and as you might remember, I had to say goodbye... It's a year ago later this month and I still miss her very often :( Bindi was my first and oldest cat, and she would've become 12 a couple of months ago. It stays a bit weird that Sue is the oldest now, and is now an age that Bindi never made. Going through all of that with Bindi, made me realize even more how lucky Sue's been that her cancer hasn't returned! But a while ago, Sue all of a sudden seemed so much older, she just looked and acted as if she was several years older already, and I wasn't sure how that would continue. She was healthy, but just seemed so old all of a sudden! It scared me big time tbh.

But now? Sue's changed lately and seems younger than before! She's doing fantastic, and we've recently been to the vet who confirmed that she's safe now from that cancer to return (else that would've happened already), since it's been over 3 years now, big yay!! If she would get cancer again it's simply very bad luck, and not the old cancer returning. Besides that, she even lost quite a bit of weight, something which I never thought would happen! We sure did try throughout the years, but her problem was simply being such a lazy cat, lol! But last couple of weeks she even plays a bit every day - and I don't mean lift her paw and poke at something, no, actually run and play :o So having said all that, you can maybe understand why this specific birthday is a bit more special for me. I know I'm very lucky to still have her with me, I'm also very happy that she's been doing so great lately. Happy Birthday to my sweet girl ♥ 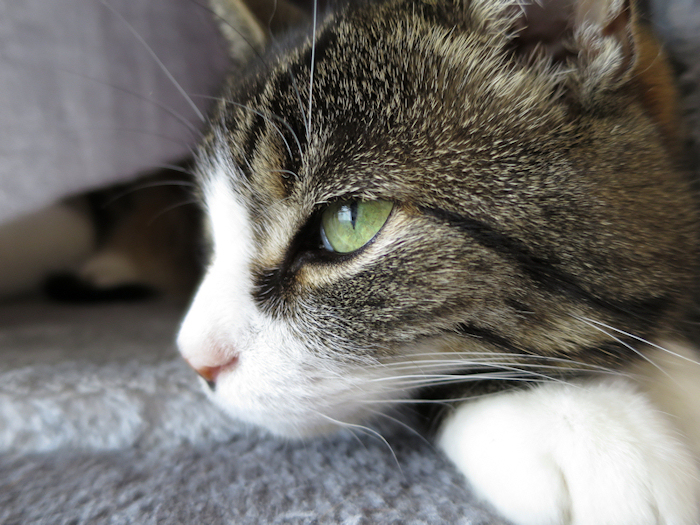 Here's how Sue usually spends her days (except lately then, there's more variation now, haha)! Sleeping somewhere, and at times hiding her head in her paws, so cute! 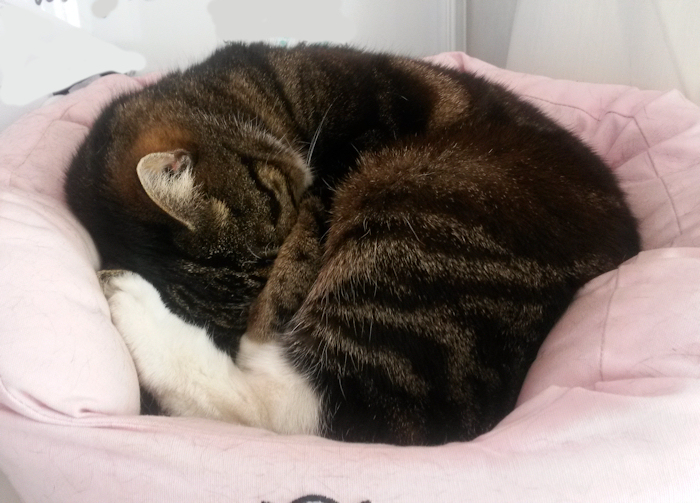 But she's also great at pulling silly faces! Sniffing the cold of a homemade popsicle :) 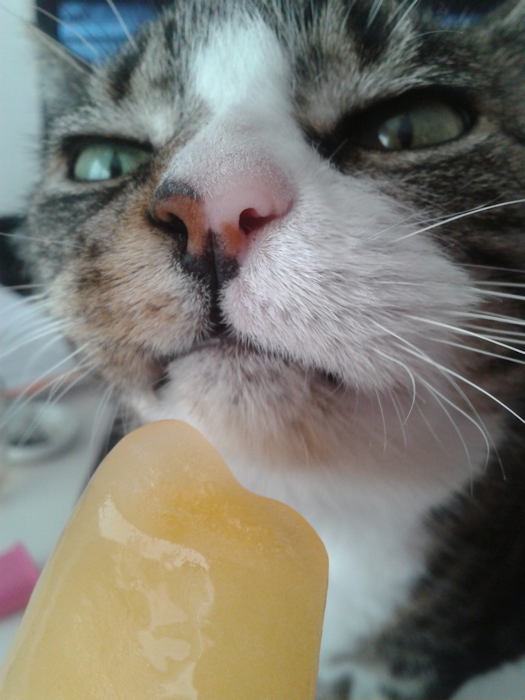 She enjoys valerian toys at times, cuddles them and kicks them with her back legs. This toy has various things inside, not just valerian, and they love it! 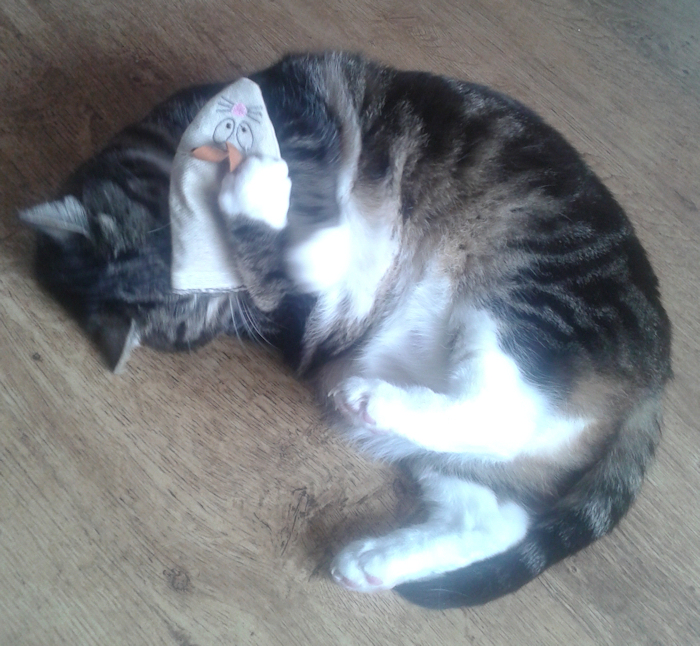 But those backlegs also make an excellent pillow, which she often uses 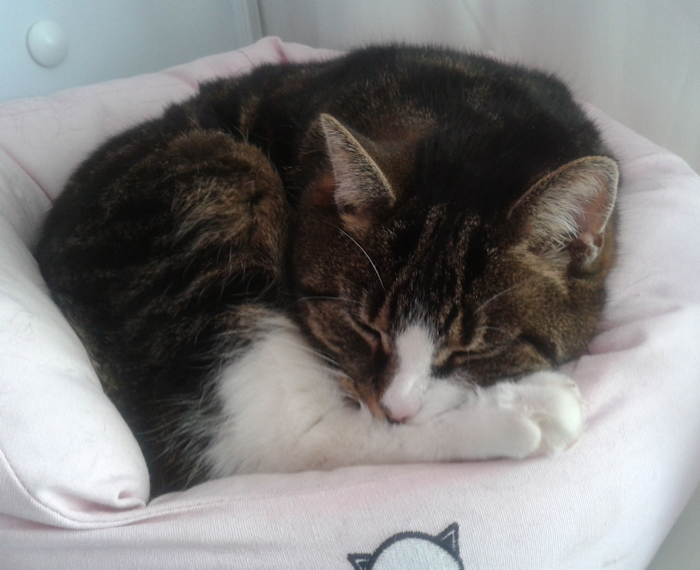 If Sue wants something, she knows how to get it, and she loves her belly cuddles at times. How can I sit behind the pc with her in front of my keyboard like this! :)

Sue refuses a lot of food (another thing that's changed a bit lately, she actually eats a very specific type/brand/flavor cat candy now!) but if there's one thing she loves... No, it ain't meat or fish, it's licking off fruit or veggies, lol! So yes, at times she's allowed to do so, and for her Bday she may lick off a piece of pear later today :P 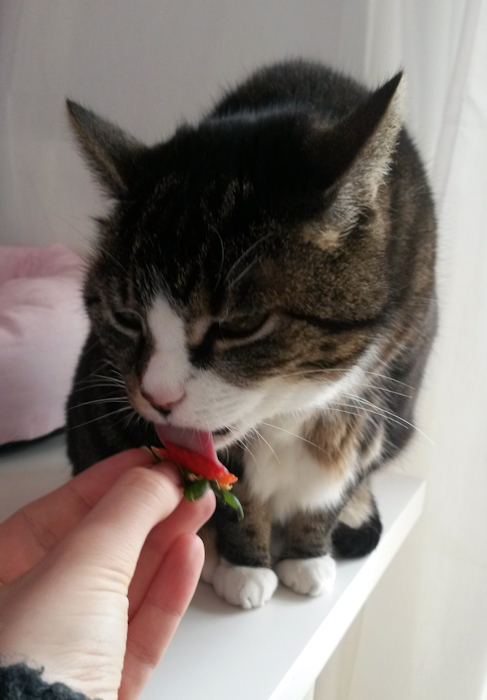 Another thing that Sue loves, rolling upside down. Often from left to right, but sometimes also just half upside down, and at times she forgets that there's a leg still sticking in the air. No, this isn't a broken cat, it's how she works, haha! 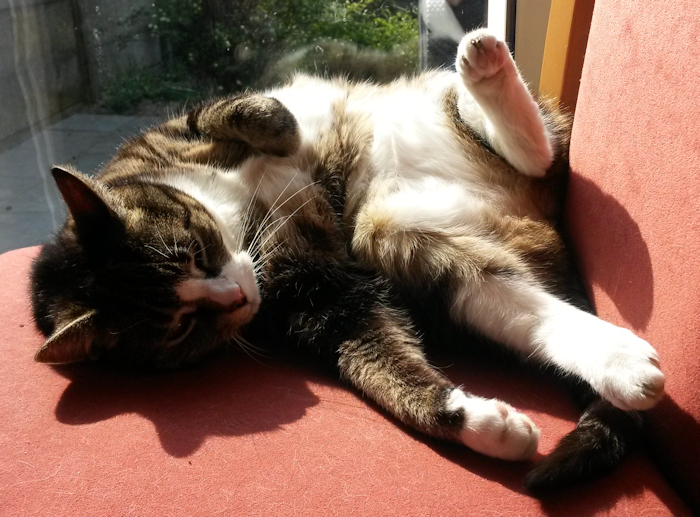 I can't express how much she means to me, she's always there, loves to snooze with me (especially during nights, she's often near me to be my pillow and wrap my arms around :)) and it's just so brilliant to see her come to live more lately! I hope she'll be with me for many more years to come :) 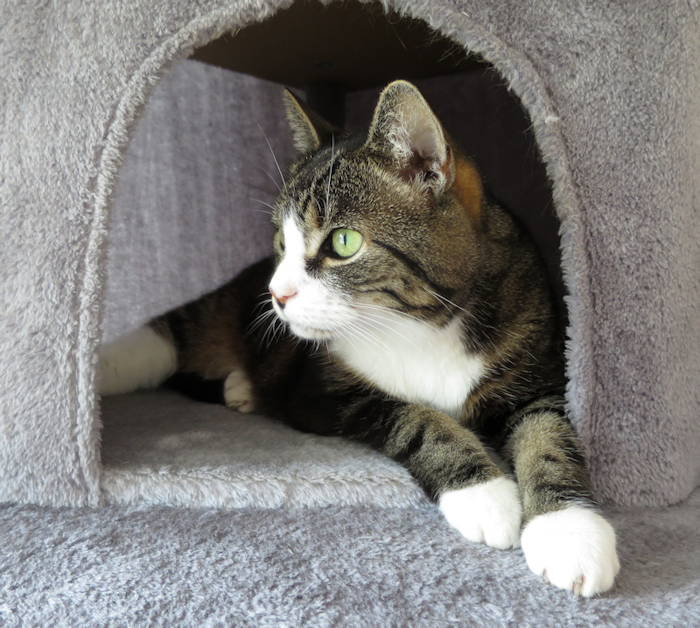