Hey all :) As I wrote in my previous post, I picked up a new fosterkitten yesterday. Or well... kitten... turns out she's closer to a year old already, oops! She was brought into the shelter a little over a week ago, she didn't seem socialized at first, but in the days that followed she started to show a bit more social behaviour towards humans. So the shelter decided to give her a chance (else I'm sure she'd be neutered and placed back where she was found), and asked me if I wanted to take her in. I was a bit nervous because of her age, based on her size she was estimated 6 months old, which is a lot older than my cats are used to. But the fosterhomes contactperson from the shelter is always great with discussing and thinking along, and we decided to go for it. Thursday she was neutered, and then they could have a closer look at her as well, which showed she was quite a bit older already. When I heard that yesterday it did concern me a bit, but sizewise she's a lot smaller luckily, so I took her home.

To make a long story short, Dewey was fantastic, Sue on the other hand seems to realize this ain't a kitten >.< And little miss attitude turns out to be a huge cuddle! Albeit in a slightly odd way at times, I guess she lacks some experience in that as well, haha. I think the shelter and the lack of a relaxed adult cat affected her behaviour quite a bit. She's a bit moodswitchy though, also to my cats (poor Dew got quite confuzed several times now, he treats her like any kitten but she's a little lady!), and she's brave and stands her ground. Today I already moved her upstairs, because Sue was upset and because I think some extra space would do Abby well. She has a lot of fun discovering all these weird playthings that I offer her :) And she was doing great in the bench, so I'm trying to work with her as fast as she can handle, while giving her enough time to relax as well.
I can notice she's not really used to a lot of things, although she manages to hide that pretty well most of the time (except her eyes, heh). She's been through a lot I think, especially the last 3 days. But based on these 1.5 days that I had her now, and the will to adapt that she shows so far, I think she'll turn out fine! I don't have many pictures of her yet and I'll update my kittenblog some other time, but I couldn't resist showing her already. So here's Abby :) 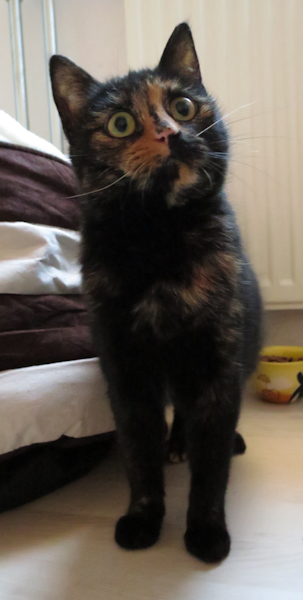 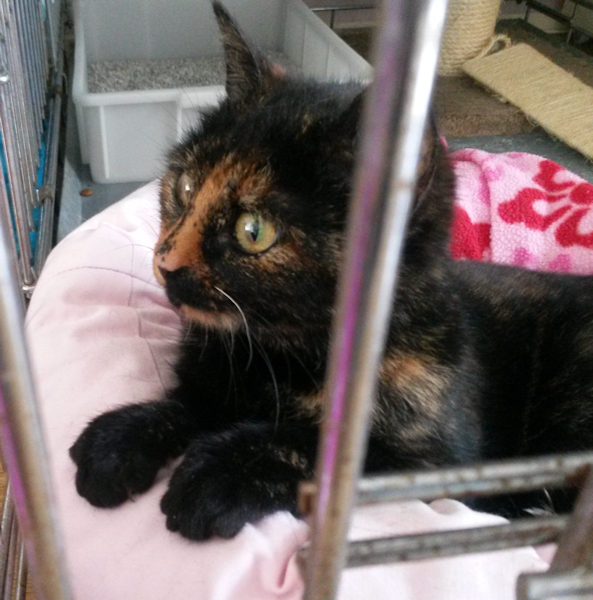